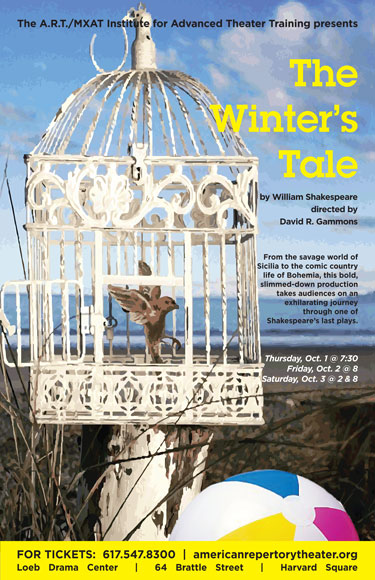 From the savage world of Sicilia to the comic country life of Bohemia, this bold, slimmed-down production takes audiences on an exhilarating journey through one of Shakespeare's last plays. The Winter’s Tale begins in Sicilia, where King Leontes fears his wife has been sleeping with his best friend. When her alleged lover runs away before the king can kill him, Leontes lets loose his rage upon his queen, setting a course that could destroy his family and his kingdom. But just as things look bleakest, hope for Sicilia’s future floats ashore in Bohemia, landing in a country of shepherds and scoundrels, blender drinks and beach parties. As winter melts away into spring, can time thaw anger and sorrow? Can the gravest of sinners earn forgiveness and redemption? The Winter's Tale features the graduate acting students in the A.R.T. Institute for Advanced Theater Training's class of 2010 performing on the Loeb Mainstage. This dynamic young ensemble brings Shakespeare's fantastical blend of tragedy, comedy, and romance to life.