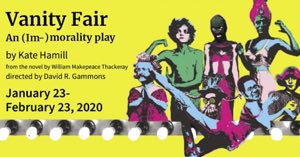 William Makepeace Thackeray’s witty and acerbic social satire of 19th-Century English mores and cultural attitudes VANITY FAIR comes to rollicking life in this fast-paced and surprisingly contemporary “Im-morality Play.” What do you want, and what are you willing to do to get it? The quest for love, sex, money, status, and power takes Becky Sharp and a cast of zany characters for a roller coaster ride! Who will end up on top as Fortune’s Wheel spins dizzily?

WINNER of the 2020 Elliot Norton Award for Outstanding Design.

Adapted by Kate Hamill from the novel by William Makepeace Thackeray